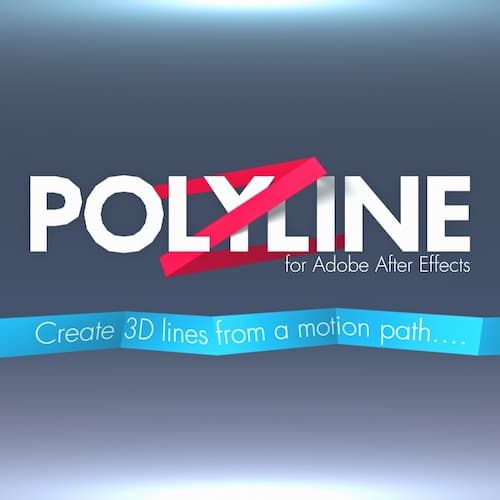 Polyline creates colorful and fully controllable polygonal lines (this is nerd talk for straight lines) that can be animated in After Effects’ real 3D space. This means they can easily weave between your other 3D layers without any fancy comping necessary.  After the polyline is created it can be easily edited. You can edit where it travels in space as well as the color and texture of each segment of the line (or the whole path at once).

Polyline constructs a rigged 3D polyline from the motion path of a layer.
Polyline creates a straight segment between each pair of consecutive keyframes.
Segments are precomp layers controlled by expressions (position, scale and orientation).
They are connected to each other using a corner pin effect and powerful expressions.
Polyline also creates null layers at each corner of the path, so you can dynamically modify the polyline by moving the nulls in 3D space. As each segment is a slice of a path precomp, you can easily change the appearence of the polyline by modifying each segment individually or the whole path at once.

Polyline interface provides a set options allowing you to control the width of the polyline, choose one the color themes, create closed polyline, and more!
Thanks to the null objects, you can also animate the segments very easily.

Note on the trial version: The trial version is fully functional except that the number of segments is limited to 3, and the Closed Path option is grayed out.